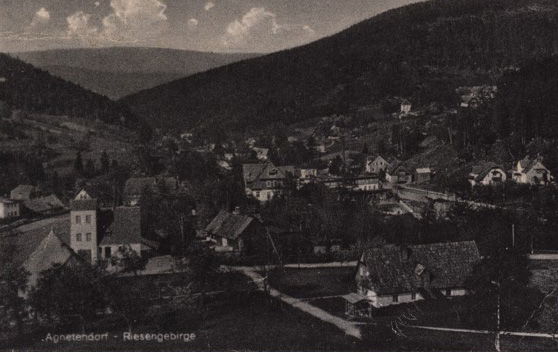 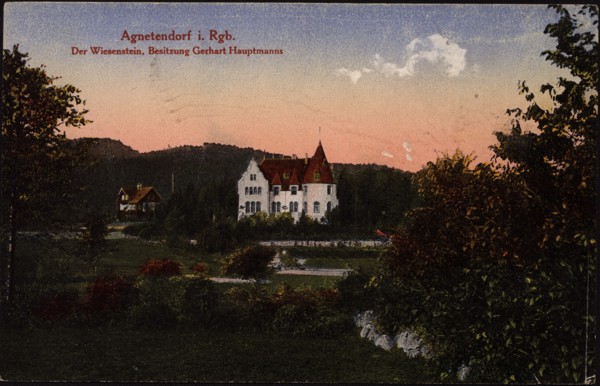 The history of Jagniątków dates back to the first half of the 17th century, when religious repressions in the aftermath of the Thirty Years’ War drove Czech protestants to the Silesian part of the Giant Mountains. The first inhabitants lived mainly off timber trade, pastoralism, and land farming. There was also quite a large group of glass blowers and gemstone prospectors who started to set up the first glass grinderies in the region in 1850.

Despite the difficult situation, the refugees received help and protection of Barbara Agnes, princess of Legnica, the wife of Christoph Schaffgotsch, who reigned in the region and owned the Chojnik castle. In gratitude for her intercession and help, the town was named Agnetendorf.

In the second half of the 19th century, as a result of the construction of a railway connecting Jelenia Góra with Zgorzelec and Wrocław, as well as the development of roads, the town started to flourish, becoming a very popular holiday destination. With the increasing inflow of tourists and, thus, the growing demand for souvenirs related to the Giant Mountains, local businesses began to thrive as well. This led, for example, to the foundation of Herzig’s Factory, which was taken over by Oskar Adam Keil in 1886 — he expanded the company and set up a lithography plant, which became the second by size and the oldest company of such type in Silesia and Germany. Their beautiful art nouveau postcards, leaflets, and tourist brochures made the region well-known and still constitute a precious gem for collectors.

The tourist industry growth in the region also affected building development in Agnetendorf — near the end of the 19th century, two large hotels, Beyer’s Hotel and Agnetenhof Hotel, were established. The residents themselves, seeing the potential for an additional source of income, extended their houses and set up rooms for visitors coming to town both in summer and winter. Guests from Berlin, Wrocław, Dresden, and Gliwice brought their money that helped the industry develop — at the beginning of the 20th century, four glass grinderies already operated in Agnetendorf.

The end of the Second World War and the Potsdam Conference brought about enormous changes in the post-war Europe with its brand-new borders. The changes also affected the residents of Agnetendorf, which initially changed its name to Agnieszków, and a year later to Jagniątków.

In the ‘70s, Jagniątków was initially incorporated within the borders of Sobieszów. Several years later, however, when Sobieszów was incorporated to Jelenia Góra, the former Agnetendorf became a part of Piechowice. It was not until January 1998 that Jagniątków became a district of Jelenia Góra.