One of the symbols of Jagniątków, reflecting the rich, multicultural history of the Giant Mountains is the Wiesenstein villa, where the German Noble Prize winner Gerhart Hauptmann once lived and which now is the seat of Municipal Museum. His connections with the Giant Mountains date back to 1890, when he, his brother, and their families were visiting the region to find peace and quiet away from the hustle and bustle of Berlin.

Although the Hauptmanns spent their first years in Szklarska Poręba, Gerhart decided to buy some land in Jagniątków in 1899 and, a year later, he laid the cornerstone for the building. Since that time, the writer frequently visited the construction site of the building, designed by the Berlin architect Hans Grisebach.

The works were completed in 1901. Surrounded by a 1.6-ha park and a view of the beautiful skyline of the Giant Mountains, the Villa was named “Wiesenstein” (Meadow Stone). The architectural style of the writer’s house, where he lived until his demise in 1946, combined historicism and Neo-Renaissance. 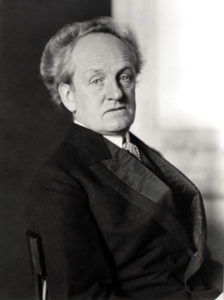 The Villa was not only the place where Gerhart Hauptmann began a new chapter of his life, which was his marriage to Margarete Marschalk in 1904, but it was also his escape from fame and the social melting pot of Berlin. Despite his desire to hide away from the big world, the writer did not forget about it. “Wiesenstein” became his representative residence where he invited numerous guests from the world of art — writers, painters, intellectuals, as well as his friends and colleagues. Some of them, enchanted by the beauty of Jagniątków, decide to settle in the region, e.g. Hans Marr (a popular German actor of that times — he rose to fame mostly as an actor and director of “Wilhelm Tell” in 1934), who built a wooden house in the neighbourhood, where he often returned. Artur Ressel, one of the closest friends of Hauptmann, also settled in the town to join the circle of artists in the region. He was a painter who produced several portraits of the writer and set up an atelier in Jagniątków.

Gerhart Hauptmann was interested not only in the world of art, but also in the everyday life of Jagniątków residents, whom he befriended – which is reflected in his writings. In his autobiographical novel “Buch der Leidenschaft” (Book of Passion), he is reminiscing the erection of Wiesenstein in Agnetendorf (referred to as Waldbach in the book), while in his diary, he reports the tragedies that affected the local community, such as the death of Lehmann, a farmer who was fatally injured by a bull.

After the Second World War, as a result of the Potsdam Conference, the Lower Silesia was incorporated to Poland. The authorities assured him that he would be able to leave and take all his belongings to Dresden or Berlin, and committed to arrange the relocation. However, the writer died in June 1946. Despite his wife’s objections, he was buried on the Hiddensee island.

Initially, the Wiesenstein villa was used as an accommodation facility for children from the war-damaged Warsaw, which is where the new name for the building — “Warszawianka” — came from. The facility operated until 1997. In 1989 the Chancellor of Germany Helmut Kohl and the Prime Minister of Poland Tadeusz Mazowiecki jointly decided to convert the building into a museum commemorating the Noble Prize winner.

In 2001, Gerhart Hauptmann House was officially opened as a cultural institution, while the museum status was conferred upon it four years later in May 2005. It still functions as “Gerhart Hauptmann House” Municipal Museum, presenting exhibits devoted to the writer as well as the rich and multicultural history of Lower Silesia.