The Chojnik Castle is one of the best-preserved castles in Lower Silesia, which cannot be ignored when travelling along the routes leading from Jagniątków.

Some researchers believe that, before the castle was built on top of the Chojnik mountain in the middle of the 14th century, which is when the first written records of the building date back from, the fortifications were erected there much earlier by the Bobrzanie tribe. As we know from the first records dating back to the 13th century, there was a hunting manor at the site, which was replaced by the Chojnik castle in 1335.

The castle location made it practically impossible to capture — from the southern side, the mountain descents vertically, while the small courtyard is surrounded by strong walls. The western part of the castle was a residential area, while the eastern part impressed with the round tower. 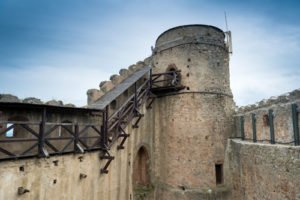 In the first half of the 15th century, the castle became the property of the Schaffgotsch family (a Silesian aristocratic line from Franconia), who owned it until the second half of the 17th century, when a fire caused by a lightning strike made the castle fall into ruin.

The castle has been renovated and redeveloped on numerous occasions. As early as at the beginning of the 15th century, the Saint George’s and the Saint Catherine’s chapels were built over the entrance gate, while in the north-eastern part, a lower castle was erected, which served for agricultural purposes. Other significant changes were made in the first half of the 16th century, when the third courtyard adjacent to the lower castle was erected — it accommodated a castle commandant residence, stables, and a tower with a starvation chamber. The last two structures worth mentioning are a magnificent bastille in the northern part built in the 16th century and additional castle fortifications made as a consequence of the Thirty Years’ War.